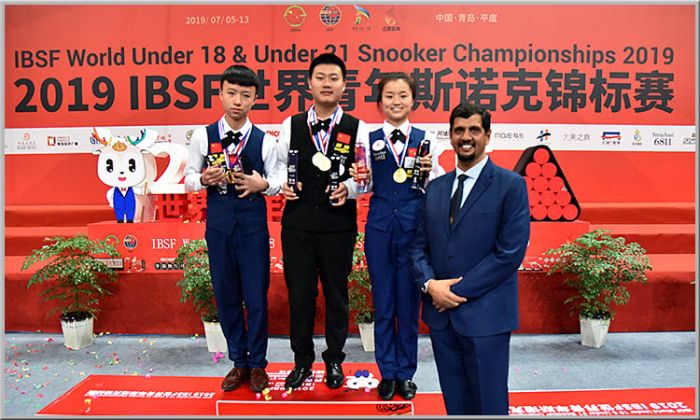 Chinese players Zhao Jianbo and Yulu Bai have become champions of their respective Men and Women category for the 2019 IBSF World Under-21 Snooker Championships. The championship was held in the beautiful city of China, Pingdu - Qingdao.

If we look at the score-sheet, both the matches reflect one-sided matches in favour of the winners. But it would incorrect to say that the frames were not exciting. In fact, Pang Junxu in Men and Nutcharat Wongharuthai gave tough fight to before losing.

Though Pang started well with a break of 57 but Zhao sent counter break of 52 points to level the score. After that Pang had chances in three frames where he could’ve made the difference but everytime he failed to give a perfect finish. He was constantly dropping the frames and Zhao maintained his lead by scoring on every chance. Lastly, he became champion of World Under-21 Boys Snooker Championship by defeating Pang 6-1.

Zhao is also champion of Asian Under-21 Snooker Championship which was held this year in April at Chandigarh, India.

In Women category, Yulu Bai of China became 2019 IBSF World Under-21 (Girls) champion. In the final she defeated the defending champion Nutcharat Wongharuthai of Thailand 6 frames to 1.

As always said in sports ‘NEVER OVERTRY’. The same mistake Nutcharat did. In second frame, she opted to double the black in centre pocket on a score of 60-60 and trailed 0-2. That must be boosting moment for Yulu and quickly she wrapped up third frame also.

Even in fourth frame, she posted an excellent 67 points break but before if finish, Nutcharat attempted recovery. She put in all her experience to place snooker for last red. Though, she succeeded to cut the trail from 57 to 25 with available 25 points on board.

After all these efforts, she hazily shown green ball to Yulu and rest is history. Yulu won the frame 87-50 and the championship.

Jiang Jun also received World Under-18 Boys champion trophy. The event was ended on 8th July, but the award ceremony was scheduled together today.