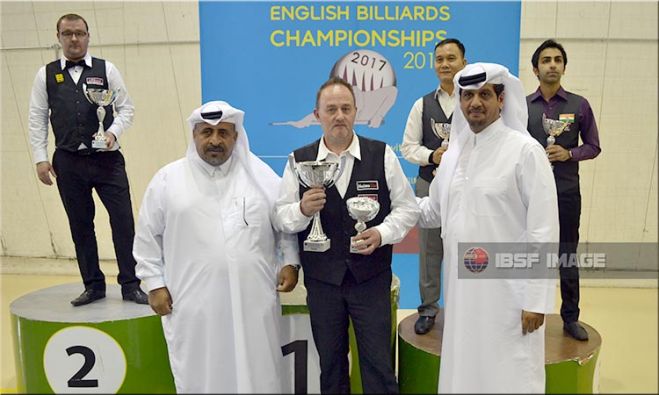 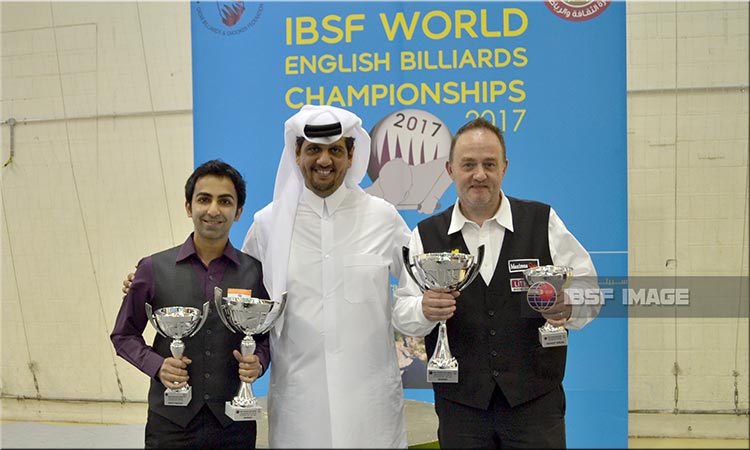 Englishman Mike Russell proved his class once again, notching up his sixth IBSF world billiards title, with a comprehensive 1500-1284 win against his compatriot Robert Hall in the long-up format final here in Doha, Qatar.

The Annual General Meeting of International Billiards and Snooker Federation took place today at Hotel Holiday Villa in Doha and the members have elected new executive members for the IBSF board for next term.

There was no election for the post of President as previous incumbent, Capt. PVK Mohan of India had not filed the nomination and the current ACBS President, Mr. Mubarak Al-Khayarin of Qatar got elected un-opposed.

Similarly, there was no nomination for the post of Treasurer against Mr. Michael Alkhoury of Syria stays un-opposed and re-elected.

For the post of Vice President and General Secretary, the voting took place as there were nominations.

Before the electoral process, there was motion moved by the IBSF Board and AGM adopted that now the Term of Office bearers has increased to 4 years to align with Olympic Movement.

Having this in effect, now the term for the elected body will be for four years i.e. till 2020.

The AGM ended with congratulations and best wishes to the newly elected board and with vote of thanks to the outgoing president Capt. Mohan for his services to the IBSF.

With regard to future championships, Malta will host the 2017 World Snooker Championship for Men, Women and Masters.

The 2017 World Team and 6Reds will continue at Egypt and for the 2017 IBSF World Under-18 and Under-21 Snooker Championship, the Board will decide between the Brazil and the China.

The host country for the 2017 World Billiards Championship will be announced at later stages.

The Egyptian Federation had arranged a day trip to Mahmya Beach yesterday where delegates, referees and players joined and enjoyed on the free day between group stage and knockouts.