Last year's runner-up Muhammad Sajjad from Pakistan today made an early exit from the competition after losing last-64 match 0-4 from Ali Alijalil of Iraq.

IBSF World Snooker Men's trophy is now confirmed to stay in Asia for the fifth time in a row. The only player in top 8 of SEAWAYS IBSF World Snooker championship 2014 who was not from Asia was Adrian Ridley of Australia, and the current world No.2 Zhao Xintong of China knocked him out 6-4 from in the quarter-final match been played today morning.

Icing on the cake that Zhao set the highest break of the competition scoring 139 in the ninth frame of this match. He surpassed Gareth Allen's high break of 134.

Adrian started on a good node and at a time he was leading 3-1 and then 4-2. Even he scored a break of 52 points in seventh frame as well but couldn't save the frame. After that Zhao maintained complete consistency in winning next frames including magnificent break of 139 points to knockout Adrian and to keep the trophy for Asia. 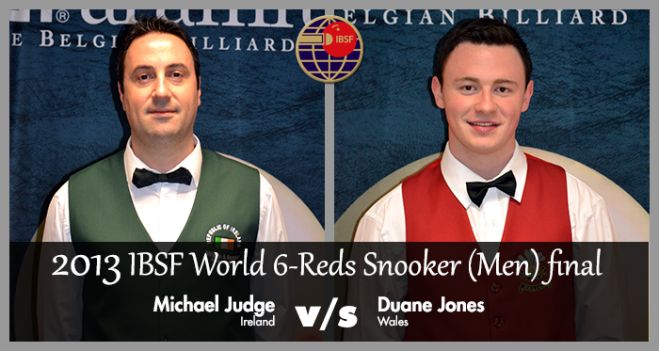 Michael Judge must be happy to keep hopes alive for Ireland to win a title. In total five disciplines world championship (6Reds and Team) organized by Republic of Ireland, Michael Judge is the only Irish player to reach in to the finals of one of them. He defeated Adrean Ridley of Australia 5-3 last night to step in the final of 6Reds Men event.