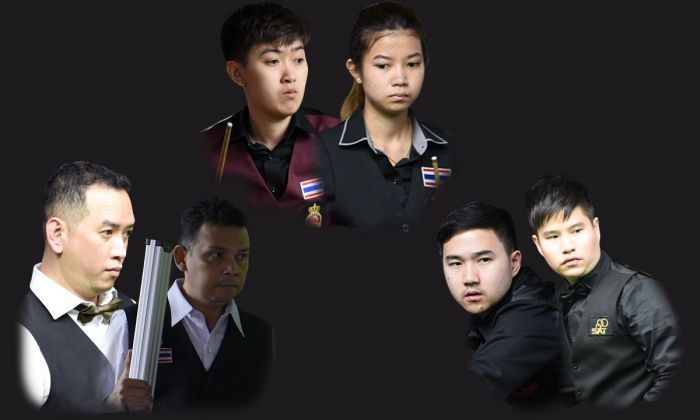 It is very rare that top-seed slot for knockout stage of all three categories i.e. Men, Women and Masters in World Team Snooker is secured by teams of one country.


This year in World Team Snooker this happened when Thailand players obtained top-seed for single elimination stage. Thailand Men team (Thanawat Thirapongpaiboon and Kritsanut Lertsattayathorn reached the knockout stage as top-seed winning all the group matches at a cost of only 1 frame and declared as top-seed. In the Group A, the only frame they lost was against China-2 (Geng Mingqi and Cai Yi Fan) and rest other matches one sided 3-0 (against Bahrain and Qatar-2)

Similarly, in Masters, the defending team players Suckakree Poomjang and Phisit Chandsri also entered the knockout stage losing only one frame and obtained top-seed. The frame they lost was doubles against Philippines players and then Phisit sent clearance break of 115, which is now highest so far for the competition.

The women team from Thailand Waratthanun Sukritthanes and Nutcharat Wongharuthai, however, lost three frames during the group stage but was the only team that won all three matches in group. Hence obtained top-seed.

Meanwhile, both the Hong Kong teams in Women category finished as No.3 in their respective groups and now playing each other in the quarter finals.