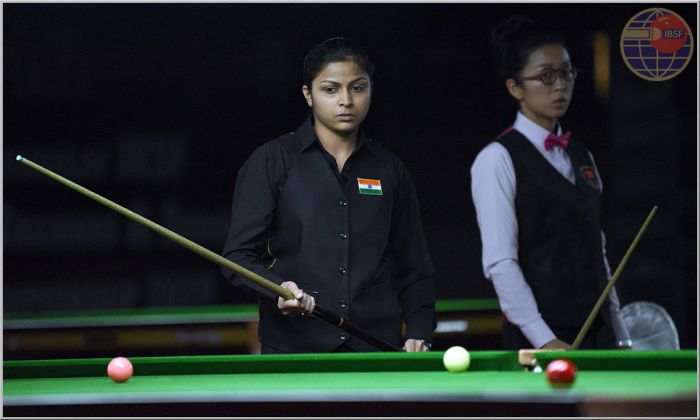 Former Asian champion Amee Kamani of India is now ready to take on Nutcharat Wongharuthai of Thailand for the title of World Women 6Reds title.


In the semi final today, Amee knocked out former World champion and versatile player from Hong Kong Ng On Yee having great scoring towards the end 4-1. Whereas Nutcharat won the deciding frame against current World junior champion Yulu Bai of China to secure her berth for the final.

Starting well on first frame with 32-19 win, Amee went down in second where Ng On Yee curtailed her on the score of 7 and won 36-07. That was the last chance for On Yee to score because after that Amee sent break of 31 to lead 2-1 and then the massive break of 62 points clearance to enhance her lead to 3-1.

On Yee maintained her hopes with slight chance in next frame but multiple errors allowed Amee to dominate once again and finally she secured last colour balls to close the proceedings 4-1.

In second semi-final, Nutcharat Wongharuthai of Thailand defeated Yulu Bai of China 4-3. Initially Yulu scored well and capitalized first two frames but after that Nutcharat recovered with back to back 3 games to lead 3-2. However, Yulu once again returned to the game with frame win but in the decider, Nutcharat controlled well and won the match 4-3.