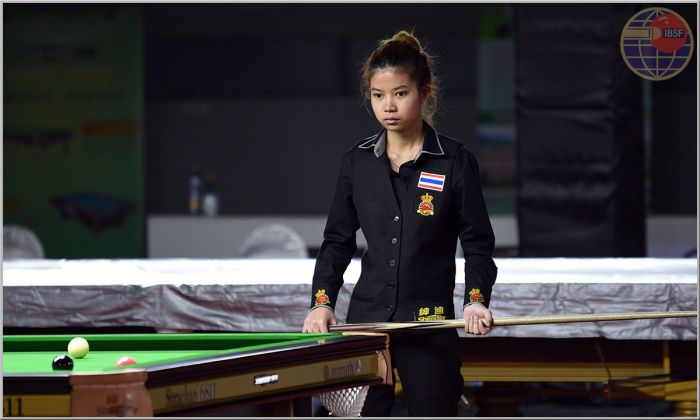 
Varshaa was in superb form and kept Nutcharat on edge in the first frame but failed to stop her in second which Nutcharat won on black ball. Alternate frame win after that kept the score level on 2-2 and then another frame win allowed Nutcharat to move ahead 3-2.

Sixth frame was extremely tight where both fought till the last ball and shown exceptionally high-quality safety on last colour balls. The amount of nervousness was clearly visible on both when the constantly missing easy regulation of shots. However, in the end, Nutcharat played a lose shot and Varshaa cleared that to set decider.

Both had equal chance to win the match but two mistakes made by Varshaa dragged her backwards. First she opened the bunch that made situation much easier for Nutcharat and second when she tried a long pot and missed and gave perfect position to Nutcharat.

There Nutcharat took lead of 28 and then played safe. However, Varshaa tried but foul on a well placed snooker once again allowed Nutcharat to score and she won 4-3.

She will now be meeting current World Junior champion, Yulu Bai who reached into the semi final by defeating Hong Kong player So Man Yan 4 frames to 1.

First frame was crucial where both countered each other but at the end, Yulu Bai managed to seal it on black ball 41-36. After that she sent two breaks of 37 and 32 points to rapidly raise her lead to 3-0.

In fourth frame, So Man Yan attempted recovery by scoring break of 42 points and countered Yulu Bai in fifth frame too, but fell short by 10 points and Yulu confirmed her entry for the medals round.