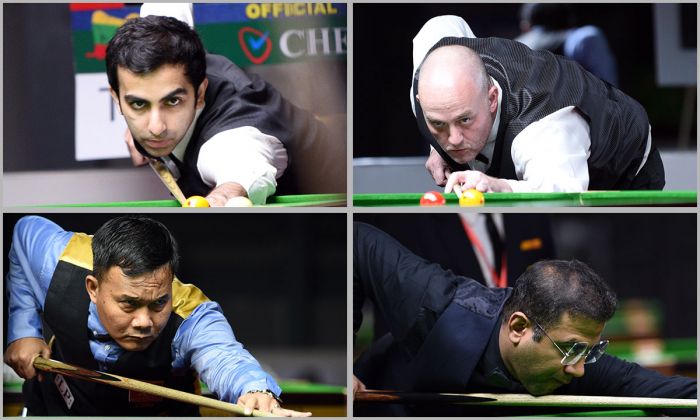 21-time world champion Pankaj Advani of India is all set to take on another multiple time world champion Mike Russell of England in the Semi-Final match of World Billiards (150-Up) Championship 2019 ongoing here in Mandalay, Myanmar.


Advani took sweet revenge of his defeat couple of days ago in the Myanmar Open Billiards where he lost to Chit Ko Ko by a close margin. Today Advani did not give him much chances and brushed aside easily by winning first two games initially. Though Chit Ko managed to pick up third game but in subsequent games, Advani returned with breaks of 74, 56, 55, 76 to close the proceedings 4-1.

Mike Russell on the other table was quick to leave the venue after defeating Min Sithu Tun of Myanmar 4-0. Although Min Sithu made two breaks of 60 and 81 points during the match, but not that enough to counter Russell’s breaks of 98, 146, 124 and 150.

Nay Thway was well aware of the winning capability of Peter and hence started with a steady game. After pocketing first game, he tried to increase his lead but after compiling break of 72, he gave a chance to Peter, which he converted in game winning break of 130 points to level the match once again.

After that Nay Thway won next two game having breaks of 98, 52 and 116 to lead 3-1. Though Peter recovered once again and cut the lead by winning fifth game but in sixth Nay Thway held his nerve better and controlled the game with a break of 104 to defeat Peter 4-2.

In the last quarter final Kothari defeated Praput by identical score 4-2 after four hours long match. Though Praput took initial lead by winning the first game but after that Sourav taken over the control and won three frames in a row. He could’ve closed the proceedings but in fifth game he missed after making a break of 85 on a score of 147 when Praput made recovery and pocketed that game.

In sixth game when Kothari missed on score of 86, Praput had a chance to set decider but after reaching on score of 94, Praput miscued and committed foul. Kothari again started from position and cleared with a break of 64 to close the proceedings 4-2.