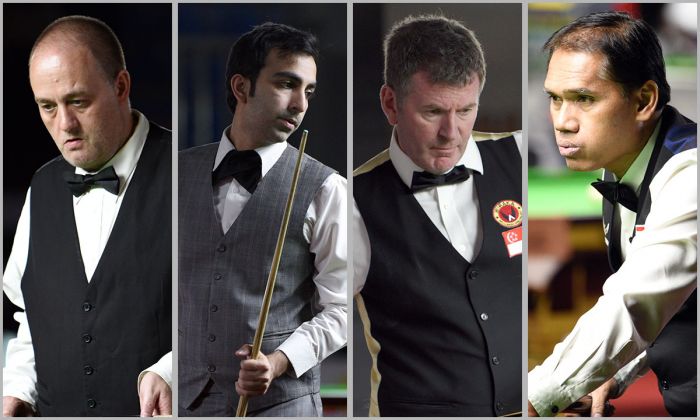 
21-time world champion Pankaj Advani rallied 3 clearance breaks of 152, 148 and 151 for the comfortable 4-0 win against his compatriot Brijesh Damani. In third game Brijesh had slight chance to recover where he reached to the score of 88, but Advani compiled two breaks of 70 and 77 and won that game too.

Multiple time world champion Mike Russell reached to the quarter final stage defeating Indian player Dhvaj Haria. First frame was easy where Russell made break of 82 points but in next, both countered each other with quality breaks. Where Dhvaj made break of 69 and 65 to score 144 points, Mike Russell responded with two breaks of 74 points each and won second game by 6 points.

In third game, Russell made breaks of 94 and 56 and raised the lead to 3-0. After that he compiled 133 points clearance break and knocked out Dhvaj.

Another world-champion Peter Gilchrist of Singapore joined earlier two in the quarter finals line up. He scored breaks of 150, 92, 62, 115 in all four frames to defeat Steve Mifsud of Australia 4-0. Though Steve managed to score break of 79 in third game but couldn’t do much against Peter.

Former world champion, Praput Chaithanasakun of Thailand also entered in the quarter finals after defeating Aung Htay of Myanmar. Aung Htay, however, clinched one frame by scoring break of 104 points but after that Praput made breaks of 93, 102 and 138 in next three games to close the proceedings 4-1.