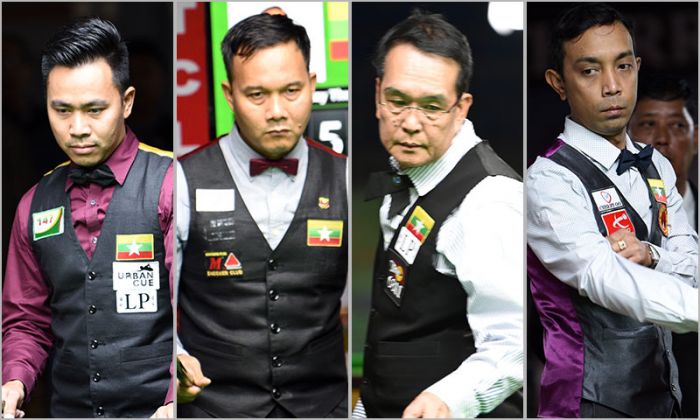 Myanmar Players produced brilliant results in the Last-16 stage of Myanmar Open Billiards championship 2019 and convincingly confirmed their berth for the quarter final stage. Chit Ko, Nay Thway Oo and Pauk Sa are the most successful players from Myanmar in this competition.

Pankaj, as expected, took initial lead by scoring 133 points break and then raised it massively having crafting huge break of 307 in 600Up format. Pankaj was leading 494-188.

It appeared that match will end soon, but then Chit Ko stabilized himself to respond with a counter break of 306 points and brought back the match at par 494-494. Even after that he constantly countered Advani and soon he moved ahead with 30 points lead.

They both constantly countered each other and spent quality time on safety. The last turning point was when Pankaj narrowly missed a shot in double baulk balls, which allowed Chit Ko to dominate and close the proceedings 601-535.

On next table, Pauk Sa also confirmed his entry in the Last-8 defeating twice Asian Champion Dhruv Sitwala of India.

Pauk Sa obtained initial lead by making breaks of 59, 131 and 128. At one stage Pauk Sa was leading by more than 400 points when Dhruv attempted recovery. Though he came quite close with breaks of 102, 95 and 124 but not sufficiently enough to stop Pauk Sa who needed only 50 points to win, which he did.

Current World Billiards No.2 and Asian Billiards Champion Nay Thway Oo was also down by around 200 points against Australian player Steve Mifsud but timely recovered with breaks of 70, 58, 53, 65, 111 and 50 to surpass him and win the match 600-409.

Another interesting match was between multiple time World champion, Peter Gilchrist of Singapore and player from Myanmar, Min Sithu Tun. Here Gilchrist was comfortably reaching to 600 points but missed 6 points short on 594. That time Min Sithu was on score of 139 and started to recover.

Only 6 points away from victory Gilchrist was eagerly waiting for his turn to finish the proceedings but his wait time was constantly increasing because Min Sithu gradually scoring and appeared to make a good recovery. Though before he could do more damage, his break ended on 250 and Gilchrist took a sigh of relief by scoring balance 6 points and confirming his position for Last-8.

The other quarter finalists are Alok Kumar and Brijesh Damani from India, Mike Russell from England and Praput Chaithanasukan from Thailand.