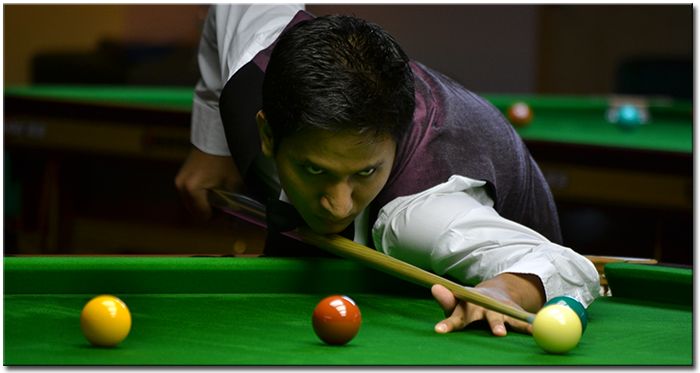 India's Laxman Rawat in his first match of 6Reds discipline in 2013 IBSF World 6Reds Championship had to work hard to win against Robert Murphy from Ireland.

In best of 7 frames encounter, Robert started with a frame win 41-01, which was immediately countered by Laxman in next frame 46-00. After that Robert won back to back two frames to gain 3-1 lead. Laxman from there onwards gave tough fight to pull next two frames and leveled the match.

In the decider frame, after scoring 10 points, Laxman missed the green long pot. Grabbing the chance, Murphy started scoring per shot and when it was appearing that he will clear the frame, went out of position on green after making 27 points.

By the time pressure started mounting on the players and both started missing simple shots. However, after long rally of safe shots, Robert had couple of chances to pot Pink but he failed. Finally, Laxman got a chance and he potted the pink and black to seal the match 4-3.

View the embedded image gallery online at:
http://www.ibsf.info/index.php?option=com_k2&view=item&id=93:laxman-rawat-worked-hard-to-save-the-match&Itemid=186#sigProGalleriaa14d0e9588
back to top