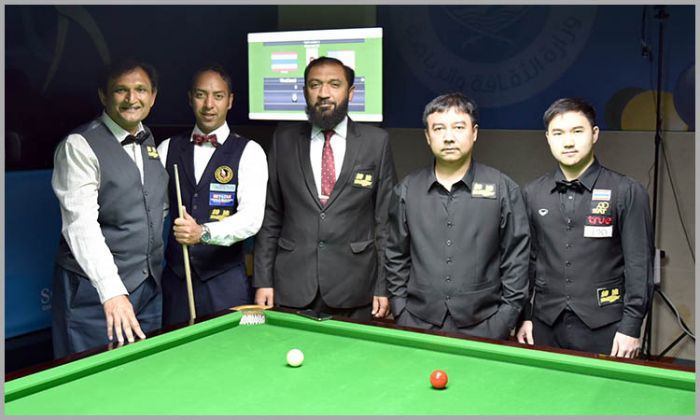 Team USA, Ajeya Prabhakar and Ahmed El-Sayed, played exceptionally high-quality game of snooker in the Last-12 knockout match against Team Thailand but in the last moment, they failed to pot pink and lost to Thailand 3-2.


Thanawat Thirapongpaiboon and his partner Noppadon Sangnil dominated first two frames including contribution of 54 points break by Noppadon to win against USA.

USA, however, made a good comeback in the doubles frame and finished that 69-40 to get a good boost. That boost actually worked and Ahmed El Sayed shown a brilliant clearance of 95 points in fourth to set decider.

The decider between Thanawat and Ajeya was really tough. Ajeya was controlling the frame very well. He obtained good lead but close to finish he gave a chance to Thanawat and he returned to the game.

Thanawat appeared bit shakey and missed after obtaining lead over Ajeya. However, Ajeya once again went for clearance from Yellow onwards but stayed unfortunate and missed the last pink. Thanawat punished that mistake by potting required pink and black to win the match.

Similarly, team China struggled against team Iraq but in the end, they made it through to quarter finals by winning the deciding frame.

In doubles frame, China made a comeback with 62 points break to cut the deficit. That frame also helped China to gain confidence. That confidence must have worked as Gao Yang managed to clinched the fourth frame despite a break of 53 by Ali Hussein.

In deciding frame, Muneeb gave a tough fight to Xing Zi Hao but remained unlucky multiple time. Lastly, he potted yellow and got white got in-off too. That chance remained costly to Iraq as Xing Zi Ho cleared balance colours and won the match.