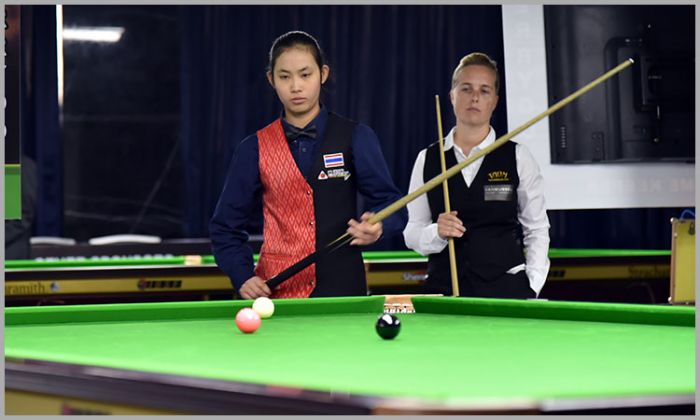 Ploychompoo Laokiatphong of Thailand has recorded the biggest win of her career by defeating the defending champion Wendy Jans 3-2 in group A of the World Women Snooker Championship 2018 here at Yangon, Myanmar.


Playing her first ever world championship, Ploychompoo has confirmed her place for the knockout stage. She has to play one more match that will decide her place in the group as No.1 or otherwise.

It was a confident opening from the 16-year-old Ploychompoo, who clutched the first frame on black-ball and moved 1-0 ahead. She, in-fact, got lead in second frame too but Wendy recovered on time to save the frame having courtesy of 38 points clearance.

Wendy blazed all her guns to save the next frame but lost by one point when she hit the hard on black and it wobbled on the jaws. After Ploy won the third, Wendy countered her once again and took the match to the deciding frame.

In decider, it was quick-fire break of 43 point from Ploychompoo and Wendy countered her crafting break of 34 points. Even after that Wendy had chance to win the match and she played safe for brown but Ploychompoo was much lucky when she hit hard on slightly visible brown, it hit the jaw and wobbled from one pocket to another and back to the previous pocket putting her on position for blue.

She then potted the blue followed by pink and black to cause biggest upset of the day.