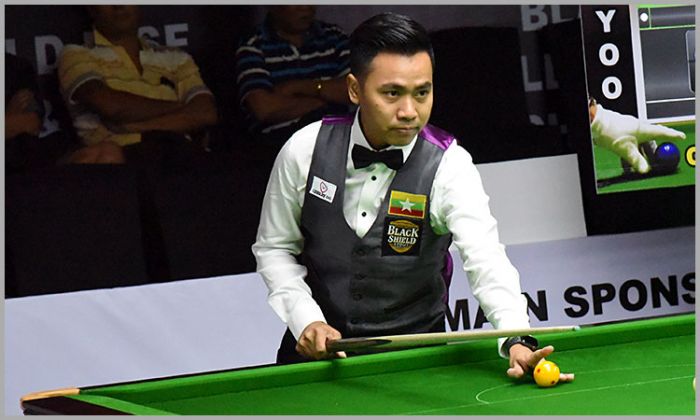 Myanmar’s flamboyant and stylish cueists Chit Ko remained on course and sent out a strong message for quarters by winning Last-16 match with highest victory margin of all morning session matches.

Chit Ko was on fire and sent two instant breaks of 84 and 98 to establish his lead. Further he cemented his lead by sending another break of 223. By that time struggle for Nalin had started resulted in regular missing of shots on important positions.

On the other side, Chit Ko was constantly scoring and once again he sent another break of 75 and confirmed his victory to meet David Causier in the quarter finals.

David has just now knocked out Peter Gilchrist of Singapore in a very tense match. Though David was leading well but Peter made an absolutely high-quality recovery break of 347 points and almost diminished the lead. It looks like that Peter will make it through but a bad kick at crucial time allowed David to back on table and he score balance 20 odd points to confirm his entry into quarter finals.

However, some disappointment in Myanmar’s camp as their star player and Runner-up of 150-Up format Nay Thway Oo lost to Sourav Kothari by 462 points. Sourav made two breaks of 260 and 247 to register win over Nay Thway Oo.