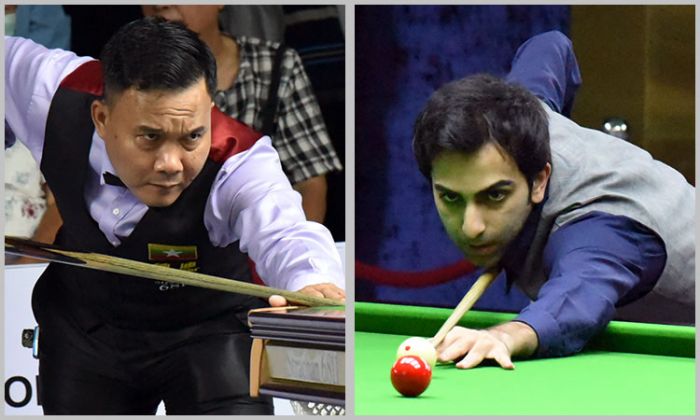 The defending champion of World Billiards Championship 2018, Pankaj Advani of India has now entered in the final of Short format i.e. 150 Up and will be playing tomorrow against Nay Thway Oo of Myanmar here at Grand Mercure Hotel in Yangon, Myanmar.

Whereas Pankaj knocked out his compatriot Dhvaj Haria and 2006 Asian Champion Aung San Oo of Myanmar.

Throughout the match Pankaj was calm and played in his actual rhythm to take on game over game and finally accomplished the semi final task by defeating David 5-0. In each frame Pankaj made decisive breaks, starting from 97 and 54 in first, followed by 139, 83, unfinished 151 and 74 in subsequent games to outclass Causier.

Nay Thway won first three games in a row scoring breaks of 150, 79 and 67. Mike pulled back one game where he scored break of 144 but again Nay Thway posted two break of 50 and 53 to maintain his lead.

Sixth frame was quite dramatic where Nay Thway missed after making a break of 128 and then Russell posted counter break of 126. After that they both missed 6-7 times before Russell won that game by 2 points 150-148.

In last game, Nay Thway gave a 93 points break start but on chance to Russell, he made 68 points only before Nay Thway closed the proceedings 151-80 and match 5-2.