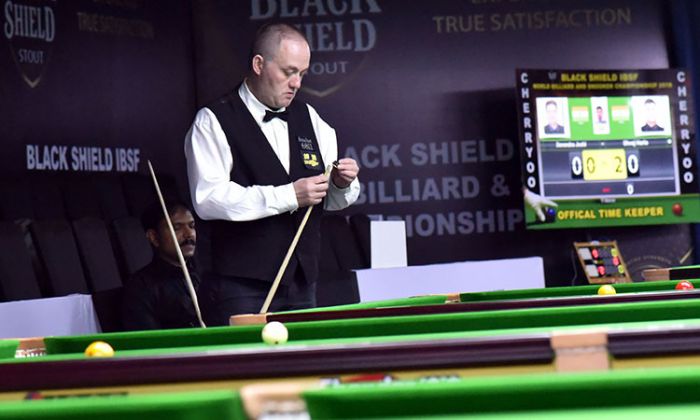 After losing one match in group round of World Billiards 2018 (150-Up), Russell finished No.2 in his group and was placed to play last-24 match yesternight. His struggle continued in the first few frames and he went down by 1 game against Aidan Murray of Ireland.


Known for better consistency for crafting big breaks, Russell’s break last night got terminated within the range of 50 to 80 but for sure, he maintained his consistency. His highest break in his match against Aidan was 83. That resulted in his match winning score as 4-2 where he lost first and fourth game to Aidan Murray of Ireland. The match was lengthy and ended after 270 minutes.

Today morning also, Mike faced tough competition from Alok Kumar of India in the pre-quarter final match. Alok was fluent with making breaks once Russell missed on 97 in first game. This fluency of Alok was shown in subsequent frames too but little unforced error costed him games despite reaching very close to finish them. However full compliment to Russell that he secured all those games despite from trailing by big margins.

After that in quarter final, Russell met another Indian player B. Bhaskar who reached in the quarters defeating Sourav Kothari 4-0 in Last-16.

By now, Russell had got his touch back and he scored four breaks from start to finish in first four games and took 4-0 in a very short time. Having so huge deficit, it appeared difficult for Bhaskar to make a comeback but he made a breakthrough by winning fifth game scoring break of 138 in response of 85 by Russell, but after that Russell made another 150 to close the proceedings.