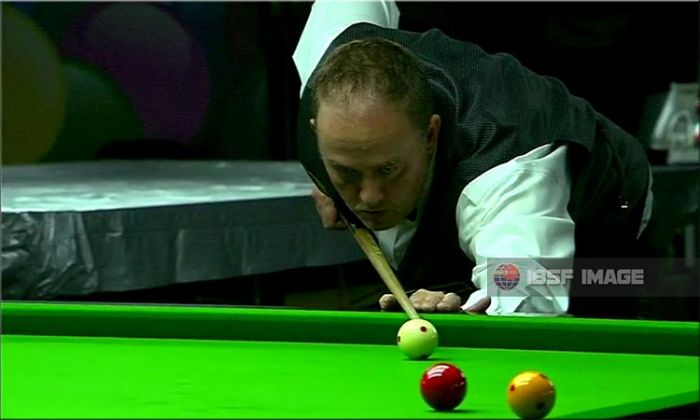 Mike Russell of England exhibited excellence of break building and that too having a good pace in the 1250-Up semi-final of 2017 IBSF World Championship here at Doha, Qatar. With that he defeated Indian challenge Pankaj Advani by 630 points and took sweet revenge of his 150-Up failure few days ago.

Advani gave a solid start with the initial breaks of 112 and 291 to take lead of nearly 400 points but when Russell returned to the table, he explored with few good shots and then went on for his ability of top-table floating-white game (Though he was playing with white so it was floating yellow in actual). After each shot, he was placing all three balls in perfect position, which making him ease to accumulating point to cut the deficit. He position was set to go for a huge break but unfortunately on 551, the ball kicked and he missed the red pot.

After exchange of few shots, Russell crafted another break of 189 to strengthen his lead. Though Advani got a chance to make a comeback but he rested after sending contribution of 130 points, as in next visit, Russell posted another break of 447 to reach 1250 points and won the match.

Russell will now take on winner of other semi-final, which is being played between Robert Hall of England vs. Nay Thway Oo of Myanmar and in current position, Rob Hall is leading by nearly 300 points.