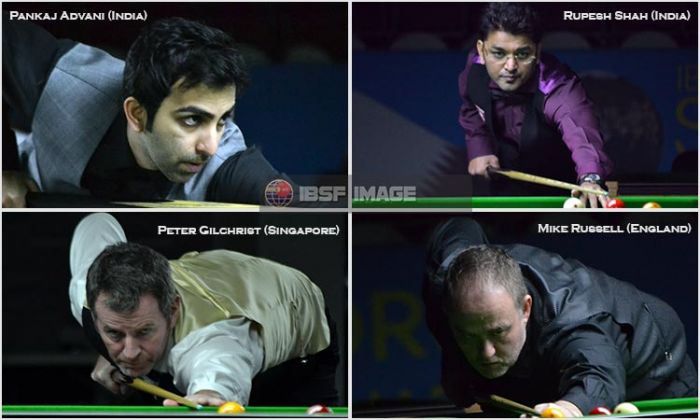 Third seed Peter Gilchrist of Singapore has reached in the medals round of 150Up World Billiards championship. In the quarter-final played today morning. He defeated India’s Siddharth Parikh 5-2.

Gilchrist was in superb form and in each game he played, contributed with worthy breaks starting with century in the first one. That followed with 87, 52, 50, 78, 99, 90 to confirm his place for semis.

In between Siddharth also got some chances but he managed to capitalized only two games i.e. third and sixth where he scored breaks of 98 and 79,73 but overall the entire match was predominantly controlled by Gilchrist.

The other semi-finalists are Pankaj Advani and Mike Russell, who also won their respective matches by the same scores, 5-2.

Advani was fantastic throughout the match as he scored century breaks in all the games he played. The only game went dry was fourth where Dhruv Sitwala scored unfinished break of 151, otherwise Advani crafted 110, 149, 137, 129, 113 and 146 to confirm medal for him.

Mike Russell was also in terrific form and produced century breaks in all five games he won. His contrition of 133, 128, 120, 150 and 154 were outstanding that didn’t allow Sourav to return to the table often. Though Sourav started up with break off 151 to seal the first game but couldn’t control afterwards. Even in last game, he had a break of 112 but failed to finish successfully. Once he missed, Russell send contribution of 154 points break to seal the match in his favour.

The fourth semi-finalists is Rupesh Shah of India who ousted Nay Thway Oo of Myanmar 5-1. Though in the last frame Rupesh missed out on 143 and Nay Thway chased him well with century break to reach 134 but one chance to Rupesh put him into the medals round.

He will now take on his compatriot Pankaj Advani in semi-finals and the other semi final will be played between Peter Gilchrist and Mike Russell.