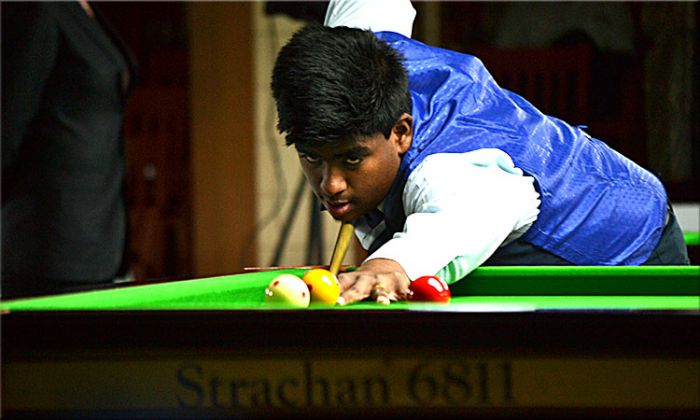 Aged 16 year, Shrikrishna caused the biggest upset of the competition by sending off former World No.3 and highly established billiards player from India Bhaskar Balachandra in Last-16 knockout stage.

Carrying vast experience in Billiards, Bhaskar enters the arena and am sure he wouldn’t have even thought of that unexpected result. He started well with small and effective breaks of 57 and 58 points before storming with a massive one of 325 points to take a giant leap.

Being a little guy, Shrikrishna stays unaffected with the scoreboard movement stayed calm and continued with hackneyed scoring as and when he was on his visit. He also scored few decent breaks of 81, 83 and a century 122 in between to stay close to the Bhaskar’s score.

In 43rd visit, Bhaskar got a chance to wrap up the proceedings but short 29 points he played a loose shot and missed the white in-off. In need of 64 points, Shrikrishna held his nerve much better and first scored 16 points and then a match winning break of 50 points in next visit to cause this upset.