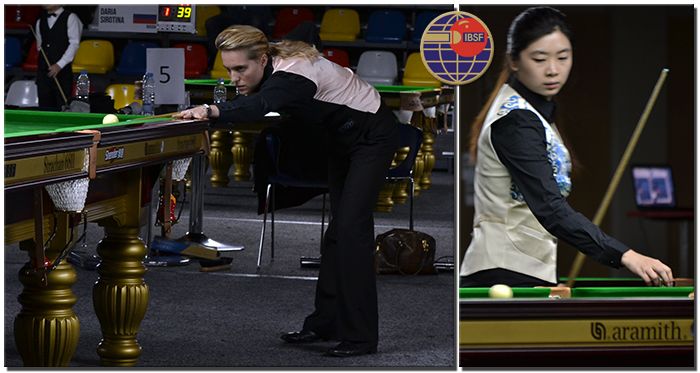 Not a pleasant day for the host country, Latvia, as their star player Tatjana Vasiljeva suffered a defeat by the hands of reigning champion, Wendy Jans of Belgium.

Wendy was in total command and started off with 30 points break. She continued with the same zeal throughout without losing a frame till the last ball she played. Wendy scored a break of 36 points in last frame also to step in semi-finals.

Wendy will now play against Chitra M. of India who defeated her compatriot Varsha Sanjeev in straight set of frames 4-0. At initial stages, the match had a close contest between these two Indians but later Varsha appeared struggling and Chitra took advantage to gain good leads in later frames to seal the match in her favour.

Former world champion from Hong Kong, Ng On Yee also one of the semi-finalist She defeated her compatriot Yu Ching at a deficit of one frame 4-1. Yu Ching managed to won the first frame but after that Ng On Yee maintained lead in remaining frames to register a comfortable win.

She will now play against Chinese player, Chunxia Shi, who has just finished the marathon match against Amornrat Uamduang of Thailand. Chunxia won 4-3. The match went for 6 hours swinging like a pendulum. Even in the last frame, Amornrat was leading by 28 point with 35 available on board but Chunxia held her nerves better to edge ahead in the last moments of play.