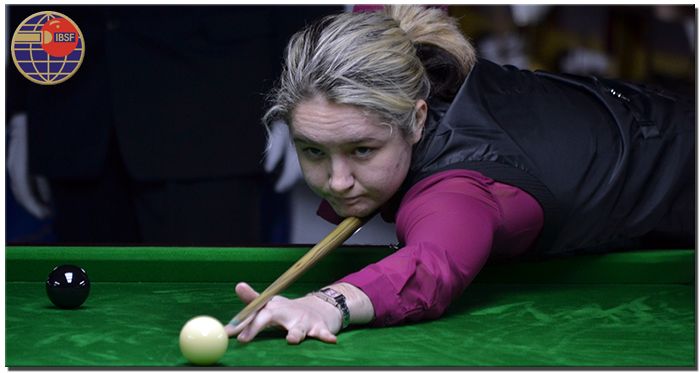 Jessica Woods of Australia made a worthy break of 62 points in decider to save her match from Latvian challenge Anna Prysazhnuka 3-2.

Home girl  Anna Prysazhnuka won the first two frames by showing off her great potting ability before Jessica pulled herself out of slumber and got down to work. In the decider, Anna was far more aggressive and scored points, to gain 30-06 lead. But after that she miscalculated a shot and left Jessica with a last chance that she capitalized it by making brilliant break of 62 points to win the match and frame.

Another Aussie player, Kathy Howden who was pitted Stefanie Teschner of Germany  too won her match from 2-0 down position. Stefanie played some good shots in first two frames to corner the Aussie but once Kathy woke up there was no looking back. It was clear that she was determined to recover and she did by winning subsequent three frames to seal the match.

In men's group, Zhou Yuelong from China seemed like he had an early appointment which he could not break. His match was the first to finish in the morning session. He scored two consecutive century of 100 and 122 followed by 55 points break to totally demolish Hussain Alawadhi from Kuwait 4-0. Before losing, Hussain had tried to save his match in the fourth frame but fall short by 2 points.