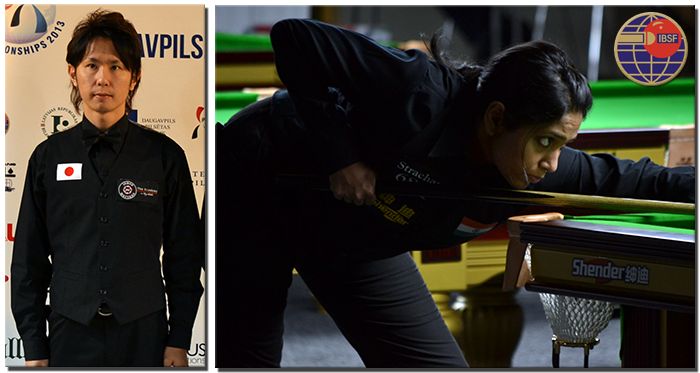 The big upset of the day was from the cue of Tetsuya Kuwata of Japan who defeated former World No.4 Soheil Vahedi of Iran. With an opening break of 83 points, Tetsuya exhibited his talent and made it clear that he was not intimidated by Vahedi’s achievements. Though Vahedi  rose to the challenge and leveled the score line by winning the next frame but after that it was Tetsuya all always. He never allowed Vahedi into the match again as he maintained a good lead in remaining frames and succeeded in creating a massive depression in the Iranian camp.

Shachar Ruberg from Israel suffered a defeat by the hands of Irishman Brendan O'Donoghue 2-4. Brendan played a controlled game to pocket the first frame comfortably. However, Shachar leveled the match by winning the next but Brendan not being impressed by the win grabbed the next two to sit in a comfortable place leading 3-1. It was now or never time for Shachar and to pull out all the big guns.  His break of 91 points in 5th frame ensured that he was still in the fray but Brendan convincingly won the sixth frame to close the match proceedings.

Finland's Timo Salovaara's brilliant efforts went in vain. His amazing recovery from 3-0 down to make it 3 all deserves applause but not a standing ovation as he eventually went down in the decider. By the decider, Mario Brincat from Malta, his opponent, finally decided that enough was enough and raised his concentration to another level to make a break of 90 and win the match.

Amornrat Uamduang from Thailand was made to sweat in her match against Kathy Parashis from Australia. Despite winning the first two frames, Amornrat struggled in next two frames and was forced to play the decider. In the do or die frame, Amornrat played a more controlled game to edge out Kathy 3-2.