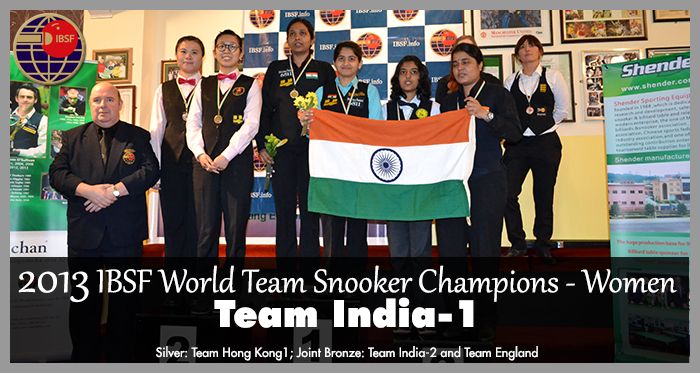 Where Team India-2 settled on Bronze, team India-1 comprises of Vidya Pillai and Arantxa Sanchis moved ahead and won the championship. In the final they defeated team Hong Kong1 in a closely fought battle.

Arantxa Sanchis played the first frame against former World champion Ng On Yee and lost badly where Ng On Yee produced a break of 40 points. However, in second frame Vidya kept the nerves under control and retaliated by winning the next frame 68-41 against So Man Yan.

The turning point of the match was doubles frame where team India-1 just managed to step ahead where Vidya potted the crucial last black.

Things were not so easy even then as Vidya lost to Ng On Yee in next frame 04-64 and the match landed in decider.

In final frame, Arantxa Sanchis took on So Man Yan and her break of 25 points in between gave them strength. So Man Yan tried hard to narrow the lead and planted some good snookers but Arantxa played all shots in control and potted the last pink to lift the world title.

Being the semi finalists, Team England shared joint bronze with another team India-2.