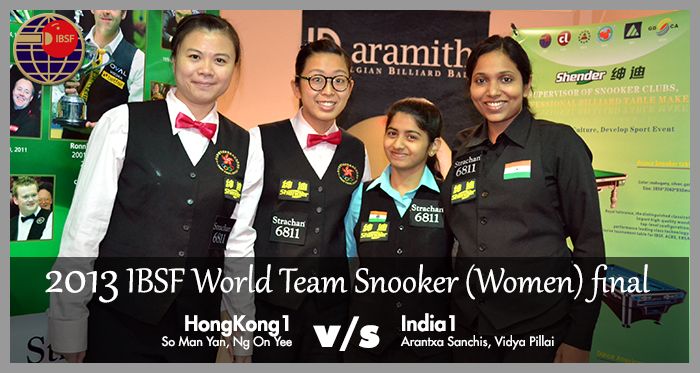 Team India1 comprises of Vidya Pillai and Arantxa Sanchis made it thru to the final of 2013 IBSF World Team (Women) Snooker Championship here in Carlow, Republic of Ireland.

Both the Indian ladies played magnificent in 2 hours long semi final against team England (Hannah Jones, Maria Catalano) and knocked them out 2-1 to confirm their entry into final.

In the semis, Arantxa played first frame against Hannah Jones and won the frame comfortably 62-25, but after that Vidya struggled in second frame where Catalano exhibited some excellent shots to pull the frame 70-50 to level the match again.

Recovering from previous frame, Vidya retaliated with magnificent shots in doubles frame and crafted small but effective breaks to gain lead by 50 points (64-14). However, Catalano attempted some snooker and succeeded to gain 5 more points but Vidya was in a hurry as she sealed the frame 66-19.

On the other side, team India2 had lost to team HongKong1 in straight set of frames Nil-2. Both the ladies, Chitra M. and Varsha Sanjeev did not play upto the mark. However, being in Semis, they will share joint bronze medal alongwith team  England.