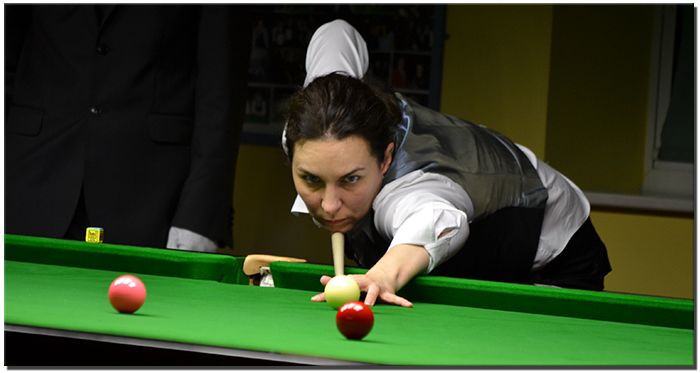 Malgorzata Sikorska from Poland created an upset in Last 24 stage when she defeated one of the tournament favourite Hannah Jones of England.

It was not easy for Sikorska to knockout a player like Jones who started the match with break of 47 points clearance but Sikorska kept her nerves under control and recovered in second frame by 8 points (33-25) to level the match 1-all.

The third frame was also dicey where Jones gave a fought hard but Sikorska again managed to go thru by 6 points (40-34). However, Jones made a recovery and won the fourth frame to level again and setup decider with Sikorska.

The decider frame went very close where Jones took a lead and potted the blue and pink to step ahead but when she was on the finishing line she missed an unbelievable easy black. After couple of safeties Sikorska finally potted the black to seal the match by one point.

Speaking to IBSF, Sikorska admitted she was very nervous on last black. Her interview is in linked below video:

In another Last 24 match, Michelle Sherwin of Ireland outplayed her compatriot Catherine Fitzsimons in straight set of frames 3-Nil.