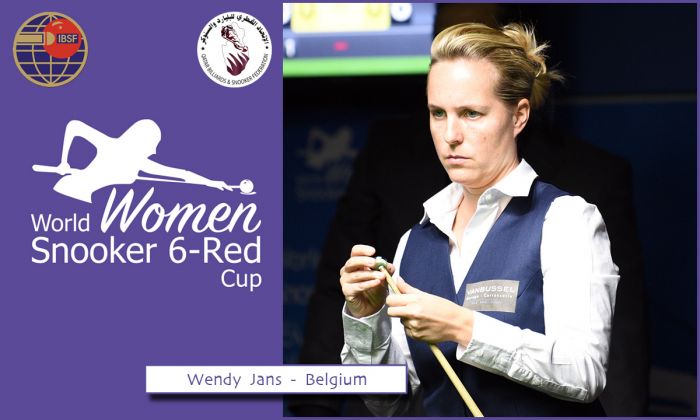 Two best players from Europe, Wendy Jans from Belgium who holds multiple world titles and many times European champion Tatjana Vasiljeva of Latvia faced each other in the quarter-final match of World Women Snooker 6Red Cup 2020 here at the QBSF Academy in Doha, Qatar.


As expected, this was a high-voltage thriller where no one was sure about the winner of the match, but lastly, Wendy won after potting last pink.

Wendy gave a decent start to her campaign and crafted a break of 31 points in the first frame. In the next two frames, Tatjana dominated and obtained 2-1 lead. After that Wendy sent quick recovery and won the next two frames to reverse the score 3-2. Next frame again went to Tatjana and both stepped into the deciding frame

Towards the end of the deciding frame, Tatjana got a fabulous chance to pot much required blue as pink and black were at quite an easy position, but she missed and gave a good chance to Wendy. Though Wendy potted the blue but couldn’t get the proper position for pink. She tried to play safe but the pink went into the corner pocket luckily and she wins the match 4-3.

Wendy will now take on Nutcharat Wongharuthai of Thailand, who reached semi-final by defeating Mariia Shevchenkov of Russia 4-2.

Nutcharat was down 0-2 and was quite close to losing the next frame too, but a crucial mistake by Mariia gave her a chance to recover and she capitalized mostly from there onwards to secure the next four frames and won 4-2.