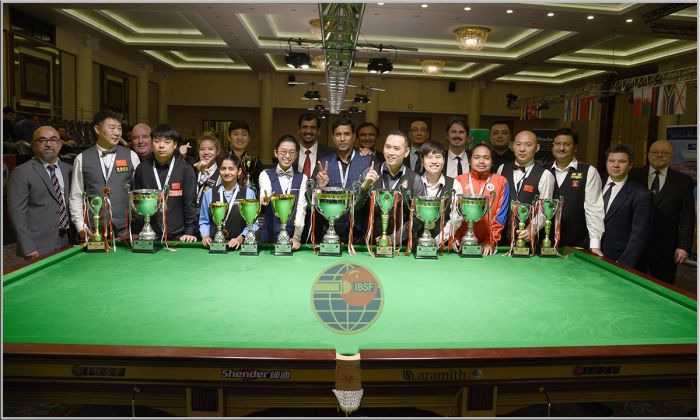 Muhammad Asif of Pakistan, Ng On Yee from Hong Kong and Suckakree Poomjang of Thailand have won the World Snooker Championship 2019 in their respective categories of Men, Women and Masters categories.


These championships held here in Antalya, the coastal city of Turkey from 29th October 2019 till today i.e. 9th November at the Starlight Hotel Resorts.

For Asif this is his second world title after he won first time in the year 2012 at Bulgaria. Today he played against Philippines player Jefrey Roda who also secured any medal for his country after a gap of 27 years.

In the start it looked easy win for Asif when he obtained quick three frames lead but Jefrey made a strong comeback into the game with a century break of 105 points. Later they both countered each other to reach 7-5 in favour of Asif.

13th frame was crucial where Jefrey fought hard but Asif held his nerve better towards the end and succeeded to win 8-5.

Women player Ng On Yee of Hong Kong also lifted her world snooker title after a gap of 9 years. This is her 3rd world title after first in India in the year 2009 and then in 2010 at Syria.

Today she outplayed Thai girl Nutcharat Wongharuthai 5-2 in the final. She was down 2 frames and then rallied breaks of 42, 30, 30 68 and 60 to outclass Thai challenge Nutcharat.

Alok won first frame and was in strong position to win second but Suckakree snatched that to level and then he went all along to win frames over frame and obtained 5-1 lead. Though Alok sent recovery in seventh frame with two breaks of 46 and 41 but that was too late as Suckakree sent another break of 59 in 8th frame to secure title.