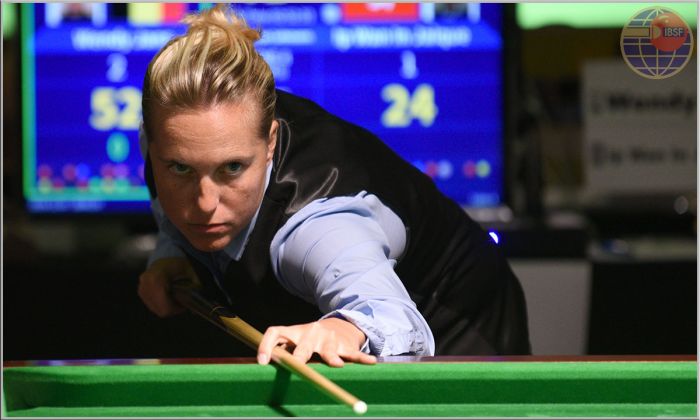 Multiple time World Champion Wendy Jans of Belgium was in comfort zone with two frames win while playing her Last-16 match of World Women Snooker Championship 2019 but faced some resistance when her opponent from Hong Kong, Ip Wan In Jaique sent a strong recovery and pocketed third frame.


Even in fourth frame, Jaique started on strong note and obtained lead over Wendy but the lead was not that effective as she spent more time in potting lower denominations. Despite having more time on table, she managed to score lead of around 15 points, which was easy for Wendy to overcome and she did on her next chance. Later she won 58-24 and the match 3-1.

Wendy will now meet Nutcharat Wongharuthai of Thailand who knocked out her compatriot Ploychompoo Laokiatphong in straight set of frames 3-0. Third frame was slightly close but not that enough to dither Nutcharat.

In other matches in Women’s category, Ng On Yee and defending champion Waratthanun Sukritthanes had easy 3-0 victory and former Asian Champion Amee Kamani won against Anastasia Nechaeva at the cost of one frame 3-1.