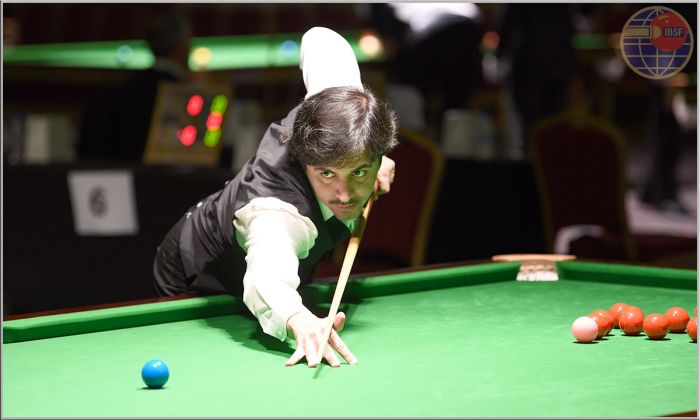 Ahmed Saif from Qatar succeed to win his match against former World 6Reds No.2 Kamal Chawla of India 4 frames to 2. Ahmed played one of the best games with a trouncing break of 83 in sixth frame to close the proceedings 4-2.


Kamal start well with frame win but dropped the second on pink ball to go 1-1. In third frame he obtained lead again with a quality break of 73 points and expressed his intentions for controlling the match further. He posted another break of 60 points in fourth but before he could seal that Ahmed sent strong recovery and countered those 60 points with small and steady accumulation of points to level again 2-2.

Fifth frame was very close where Kamal covered the trail and had good chance to make a tie for re-spot black but missed much-needed pink and allowed Ahmed to lead 3-2.

That was the last chance Kamal could do anything as in sixth frame Saif sent match winning break of 83 points to close the proceedings.

On adjacent table, another Indian player Aditya Mehta struggled against Chang Yu Kiu of Hong Kong but managed to win 4-3 with a break of 59 in deciding frame. At one stage, he was down 2-3 but after that clutched the situation and won next two frame with superb control.